As I was living in Gibraltar, Portugal was only a 3/4 hour ride away so I hopped on my bike and took myself towards the Algarve. I didn’t have anywhere booked or any plans. I had about 5 days and no plan at all. I had never been to Portugal before but it wasn’t my first choice. I intended on taking the bike around Morocco but I had difficulty gaining insurance for it and I had read a load of stories on bike trips gone wrong (which I don’t usually pay attention to). I hear now that you can get insurance on the boarder which doesn’t sound too difficult.

Anyway, I arrived in Portugal after a blitz down the costal highways and headed straight to the Algarve. I stopped off at the small towns on the coast and checked out the area. It was here that I first come off my bike (but not the last). I was apparently heading down the wrong way of a one-way road in Tavira and someone pulled out without looking both ways and I slipped on the cobbled road as I hit the brakes. I was fine and the bike took little damage. I was a little shaken but that was it. I immediately left after my fall and rode to Faro where I had a hotel booked. I got there just before dark and checked in my hotel and headed out for a few beers and some food.

In the morning, I got back on the bike and ventured towards Largos, stopping off on the way and enjoying the beautiful sights of the Algarve. The place had plenty of golf courses and water parks but it was the sweeping, winding roads, meadows and stunning landscapes that impressed me. I was enjoying every thrilling second of my ride. I avoided any highways and stuck to riding through all the towns on the way there. The day’s ride wasn’t too eventful but I got some good footage and some cool photos. I stopped off in Largos and went for food and beers. I explored the place on my bike which didn’t really impress me too much. I wouldn’t holiday there, but there were some nice beaches.

The best was yet to come, after I left Largos and got out of the Algarve the roads really started to change (for the better). I rode towards Sagres and the roads were empty, just beautiful views and the occasional desolate gas station. Sagres is a little surfing town which is only appealing to avid surfers. I checked the place out and soon started my journey towards Lisbon. I had a long ride ahead of me but it would be the best ride of my life. Never have I ever experienced roads like this, it was motorbike perfection. I was riding the twisting road through something so beautiful it was named a national park. It was a silent ride with only a few fellow bikers enjoying the marvellous roads. Every so often I’d come across a small Portuguese town that impressed me, that’s the beauty of riding a bike, you see so much more than any other mode of transport. 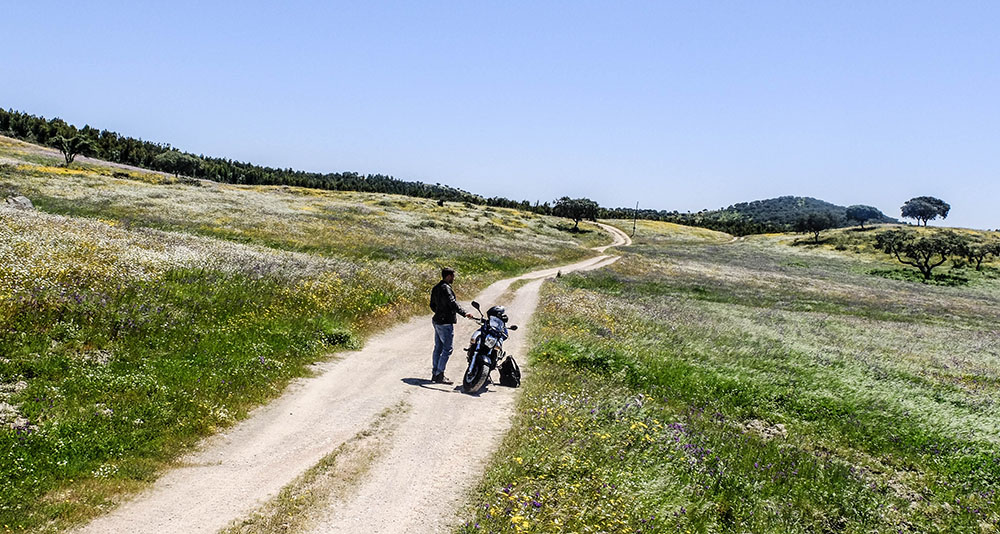 As I started to get closer to Lisbon I was hitting lots of traffic. It was Friday around 6pm so I guess peak time. It was absolute grid lock for miles and miles. Did it matter? No. I whizzed right through and turned my nose up at those sitting in their cars. The traffic went right over the famous 25 de Abril Bridge which has a lot of similarities to San Fran’s Golden Gate Bridge (built by the same construction company). I eventually got to my Hostel in Lisbon and managed to park right outside. Lisbon was a pain in the arse to ride around with its cobbled roads, hills, trams and heavy traffic. I was happy to get off the bike and into my room. 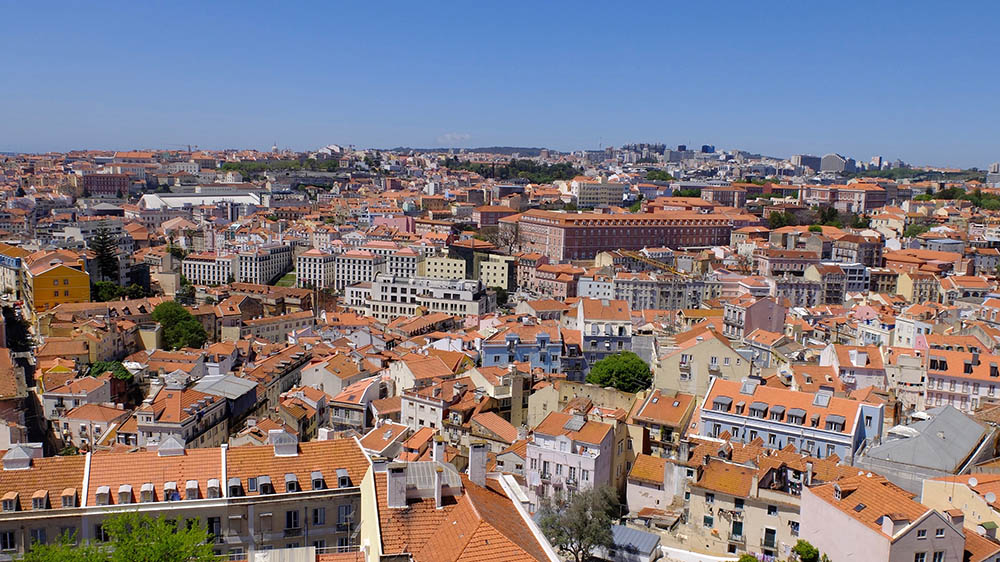 Lisbon is a beautiful city and one of the best places I’ve spent a weekend, but I won’t dwell on it. It’s back to the biking. I got on the bike and ventured out of Lisbon, I took another bridge out of Lisbon which is the Vasco da Gama Bridge, a 17km long cable-stayed bridge, spanning the River Tagus. It’s the longest water crossing bridge in Europe and it was windy as hell on two wheels. I had some close calls but managed to make it without coming off, it wasn’t easy and it wasn’t enjoyable! 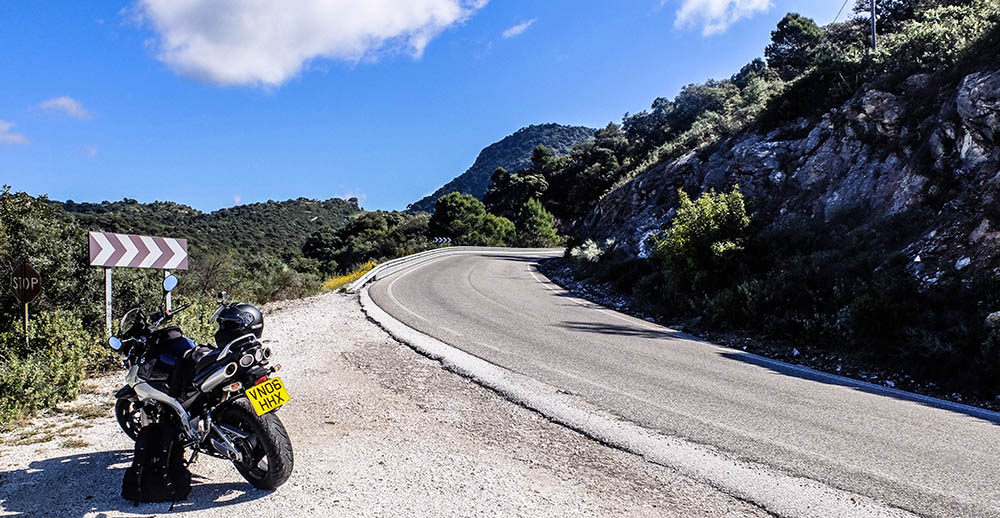 I was now heading towards Evora where there are some Roman ruins I wanted to check out. The road from Lisbon to Evora were stunning, flat roads with meadows either side. It was spectacular, the sun was beaming down and there were no cars to be seen, just me and the road. It was one of the best experiences I have enjoyed on my bike. I often stopped and took in the beauty of the landscapes (and a couple of photos). I eventually reached Evora and rode around the place, checking out the town and the Roman temple. I stopped for some food and got out of my gear for a bit. I had covered a lot of miles, other than the ruins Evora didn’t offer much else for me, so I started my ride towards Badajoz in Spain, which also had famous Roman ruins to see. 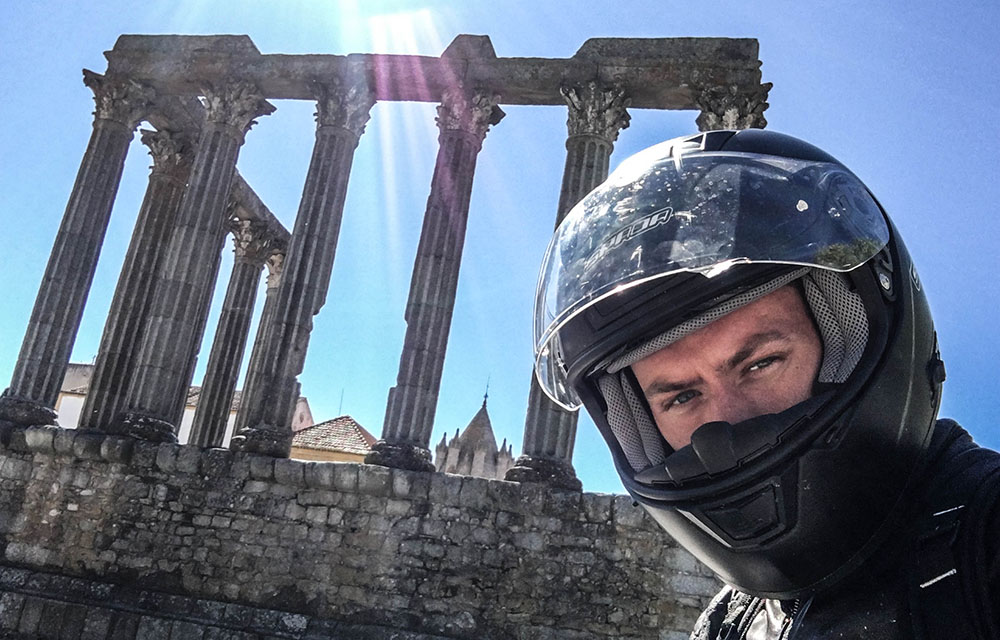 Once I got to Badojoz, I quickly looked around and saw the Roman ruins before making my way to Marida, from there I’d take the highway to Saville. I blasted down the highway to Saville and managed to make it before sundown. I checked in a hotel for a night and enjoyed the wonders of Saville, which really impressed me. I was only two hours from Gibraltar, I had enjoyed my tour around Portugal, it was my first long distance ride and certainly not the last.